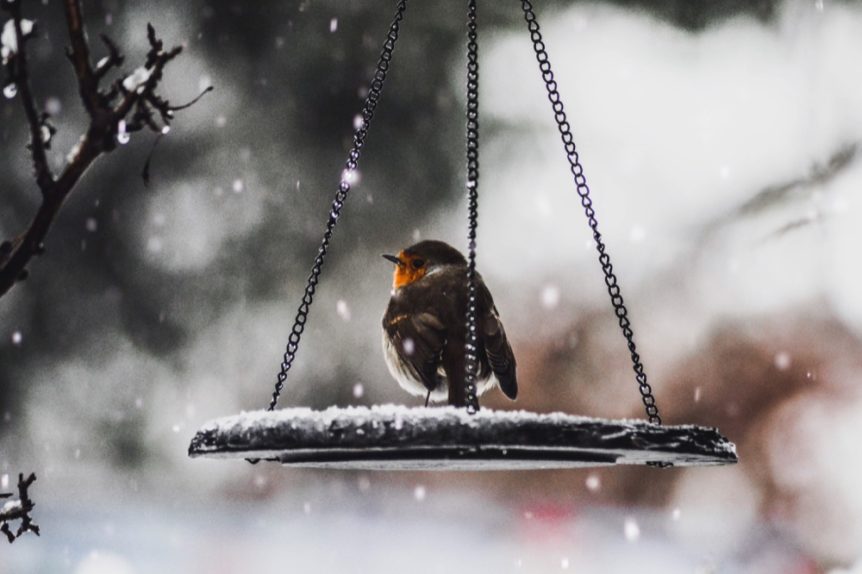 When the set time had fully come, God sent His Son, born of a woman, born under the law, to redeem those under the law, that we might receive adoption to sonship. (Galatians 4:4,5)

In Houston we seldom get snow, but it’s already snowed in northern parts of Texas this year. The newscasts reminded me of a story below that I thought you might like.

Bill’s Snowstorm. Bill was not a scrooge. He was kind, decent, and generous to his family. He was honest in dealing with others, but he was not yet Christ’s follower. Bill didn’t believe in Jesus’ historic incarnation (in-fleshing) that Christmas celebrates. It didn’t make sense to him that God really could or would or did come to Earth as a man, so Bill wouldn’t go to church on Christmas Eve. He stayed home while his family braved the snow to worship Christ our King and to sing His praises.

The heavy snow was piling up and Bill was startled by a thudding sound. Then another, and then another. He thought someone was throwing snowballs at his window. When he went out to investigate, he found a flock of birds scared and huddled in the snow. They were desperate for shelter and tried to fly through his large picture window.

Bill didn’t want to let the poor birds lie there and freeze, so he decided to let them into his warm garage. He put on a coat and tramped through the snow. He opened the door wide and turned on a light, but the birds wouldn’t come in. He sprinkled bread crumbs on the snow, making a trail to the wide open door. But the birds ignored the food and flapped around helplessly in the snow. Bill tried catching them and shooing them in. Instead they scattered everywhere, refusing to enter the warm, lighted, safe garage.

Bill realized they were afraid. “They must think I am a strange creature. If only I could let them know that they can trust me, that I am not trying to hurt them, but that I want to help. But how? Any move I make frightens and confuses them. They won’t follow me to safety. They won’t be led or shooed into a better place because they are terrified of me.”

Bill’s Idea. He thought, “If only I could be a bird, mingle with them, speak their language. Then I could tell them not to fear. Then I could show them the way to the safe, warm garage. But I would have to be one of them so they could see, hear, and understand me.” At that moment the church bells rang. Bill listened to the chimes announcing Christ’s coming and he remembered these Scriptures he’d heard years before:

For to us a child is born, to us a Son is given, and the government will be on His shoulders. And He will be called Wonderful Counselor, Mighty God, Everlasting Father, Prince of Peace….But you, Bethlehem Ephrathah, though you are small among the clans of Judah, out of you will come for me one who will be Ruler over Israel, whose origins are from of old, from ancient times.1

Bill’s Awakening. Now the Christian message finally sunk in and made sense to Bill. He sank to his knees in the snow and asked the Lord Jesus to save him. It was the first real prayer he had ever prayed and it was the beginning of a whole new life for Bill.

“God’s Son was in the world, and though the world was made through Him, the world did not recognize Him. He came to His own, but His own did not receive Him. Yet to all who did receive Him, to those who believed in His name, He gave the right to become children of God…born of God. The Word became flesh and made His dwelling among us. We have seen His glory, the glory of the one and only Son, who came from the Father, full of grace and truth.”2

Edward Caswall’s Christmas hymn begins:
“See amid the winter’s snow, Born for us on earth below,
See the tender Lamb appears, Promised from eternal years.
Hail, the ever-blessed morn! Hail, redemption’s happy dawn!
Sing through all Jerusalem, Christ is born in Bethlehem.”

Fellowship with God through Jesus. Approaching God and prayer is possible only because Christ came down from Heaven and removed the sin barrier between us and God, caused by our wrongs. Sin separates us from God and apart from Christ we have no right to come to God. But Jesus came down and lived a sinless life for us, and died on the cross the death we deserve, and rose from the grave to give us new life. Christ atoned for our sins and removed the barrier. Now God gives us the privilege of coming into His presence through Jesus our ever-living Mediator. The Bible says: We can boldly enter heaven’s Most Holy Place because of Jesus’ blood We can come boldly to the throne of our gracious God. There we will receive His mercy, and we will find His grace to help us when we need it most.3

Who can add to Christmas? God’s perfect motive is that He so loved the world. His perfect gift is that He gave His only Son. His only requirement is to trust Jesus. The reward of faith is that you shall have everlasting life in Christ.4

Aren’t you glad that Jesus, the Creator of the heavens and the earth, stooped so low to become one of us? Are you glad that the Son of God became a man to make us God’s sons and daughters? Aren’t you glad that Christ personally carried our sins in His body on the cross so that we can be dead to sin and live for what is right, and that by His wounds we are healed?

O come, let us adore Him, Christ the Lord!

Prayer: Lord, give me faith to trust, love, obey, and follow you. Sustain my faith. Strengthen it. Deepen it. Don’t let it fail. Make faith in Jesus the power of my life, so that in everything I do, you get the glory. You are the greatest Giver. Thank you for sending Christ to be the Savior of the world. Help me to follow Him. In Christ’s name I pray. Amen.

Go in peace, beloved. Walk with Christ our King today and be a blessing to others!

Note: I’ve heard several versions of Bill’s story. The above is adapted from Paul Harvey.