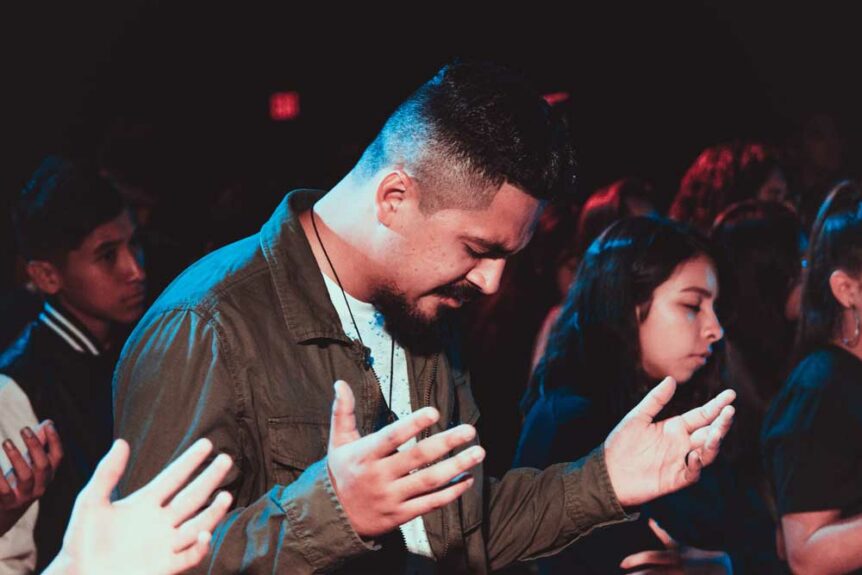 An Illustration from World War II

In 1939, German warplanes began bombing London and the government feared that societal chaos would follow. Would civilians be ready for the trauma and horrors to come? How would they cope if life as they knew it was overturned? How would they grapple with the nightly threat of injury or death? Would they riot, loot, go on murderous rampages, or freeze in total inertia?

This Nazi bombing was known as “the Blitz,” and killed over 60,000 civilians. But praise God, the chaos never materialized. The attack achieved the opposite of what enemies intended. People came together, worked together, and prayed together like never before. The stress of the aerial bombardment was outweighed by the benefits of sticking together and serving one another in their communities.1

The story above reminds us that Christians are always at war against Satan’s kingdom of darkness. This war will not end until King Jesus returns to destroy the evil one, and until that day we are to be strong in the Lord and in His mighty power. We put on the full armor of God in prayer so that we can take our stand against the devil’s schemes. Pastor Samuel Chadwick (1860–1932) said that Satan tries to keep Christians from praying together because our prayerless activity never threatens him. The devil laughs at our toil, mocks at our wisdom, but he trembles when we call on God to help us.

This builds on several previous posts. You can read Praying Together and Praying Psalm 44 (Part 1)(Part 2)(Part 3)

Atheism Is Cruel, But God is Good

Author Francis Bridger said that atheism is cruel because it teaches that in the end, injustice cannot be righted, suffering cannot be redeemed, and evil triumphs after all. The Bible teaches the opposite. God (the Father, Son, and Holy Spirit) is infinitely, eternally, and unchangeably loving, holy, wise, and powerful. And He governs every creature and every action, ordering them all for His own glory and our everlasting good. The Lord is still in charge of His universe and He’s got the whole world and us in His hands. Current disasters (world-wide and personal) will pass, like all past disasters.

So troubling times are opportunities to trust and obey God by faith. We are God’s Christ-like children living in a fallen world and the Lord has promised to preserve us. So we are to shine for Him and bring people Jesus’ good news in word and deed.

In the Bible, Job suffered excruciating agony. His family, possessions, and health were all taken away. For many chapters, he expresses confusion and anger, crying out to God in prayer. He keeps saying, “I don’t want to suffer without the wrongs being righted. I want to appear before God, to talk to Him, to meet the Lord face to face.”2 At the end of the book, the Lord really shows up and blesses the latter part of Job’s life more than the first part. Paul reminds us that our temporary troubles are achieving for us an eternal glory that far outweighs them all.3 Ultimate victory in Jesus is guaranteed!

God Is in Control

When feel like we are worn down to nothing, Christ is up to something. He is in control of everything and we must trust the Lord for what we can’t manage. We must join in pray together in hard times and remind each other of Christ and His pledges to us.

The Old Testament prophecy of Malachi was written near 500 BC. Those were dark times for the Lord’s people, but chapter 3 closes with these hopeful words:

Then those who feared the Lord (in a loving, trusting way) spoke with each other, and God listened to what they said. In His presence, a scroll of remembrance was written to record the names of those who feared Him and honored of His name. “They will be my people,” says the Lord of Heaven’s Armies. “On the day when I act in judgment, they will be my own special treasure. I will spare them as a father spares an obedient child. Then you will again see the difference between the righteous and the wicked, between those who serve God and those who do not. (Malachi 3:16-18)

Not many people were following the Lord at that time, but the faithful ones gathered together for mutual encouragement and prayer and God listened and encouraged them. The Lord said they are precious to Him, He will show them compassion, and He will send Jesus the Messiah to save His people from their sins. That reassurance from God came as they prayed together.

So We Pray Together

John Chrysostom (c. 347-407 AD) was an early church leader. He wrote that sometimes we cannot get answers to praying alone that we may obtain by praying together. Our individual strength can fail us, but our prayers can be more effective when we unite in prayer, asking God’s blessings. Spurgeon calls us to imagine getting fruit down from a tree. We often don’t get the fruit off with our first shake of the branches or even with many shakes on our own. If the tree is sturdy, we need to recruit others to help us rock the branches back and forth, shaking with all our collective strength to receive the fruit. Sometimes prayer works like that.

Jesus says: “Again, truly I tell you that if two of you on earth agree about anything they ask for, it will be done for them by my Father in Heaven. For where two or three gather in my name, there am I with them.”4 Christ was specifically addressing the need for church unity in disciplining a sinning member. But His saying also applies to praying together. The Holy Spirit lives in each individual Christian, but He promises to be with us in a special way when we gather in Jesus’ name for prayer, worship, service, and building up one another.

When God intends to show great mercy to His people, the first thing He does is to set them a-praying. (Matthew Henry)