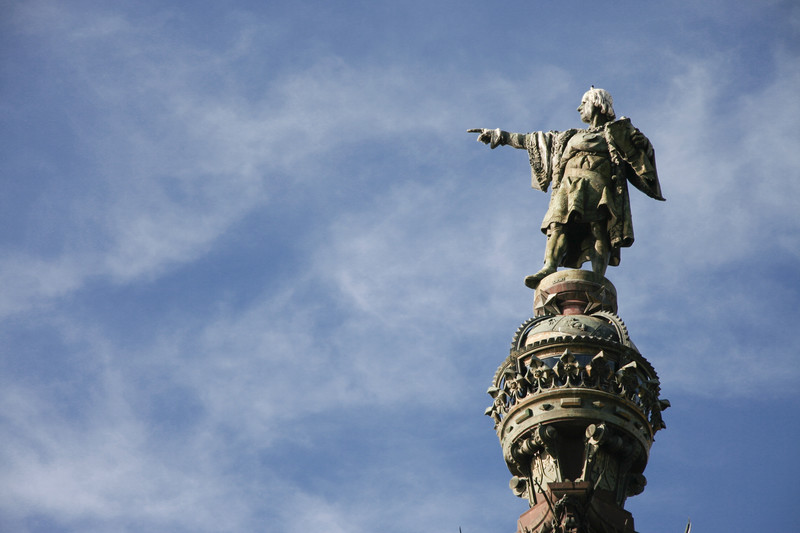 I used this story at a funeral service, pointing survivors to our eternal hope guaranteed by Christ’s resurrection.

Jesus says: Do not let your hearts be troubled.
Trust in God; trust also in me.
In my Father’s house are many rooms;
If it were not so, I would have told you.
I am going there to prepare a place for you.
And if I go and prepare a place for you,
I will come back and take you to be with me
that you also may be where I am. (John 14:1-3)

Christians are confident about Heaven because Jesus, God’s Son, came down from Heaven in His incarnation and He returned there in His ascension. We are sure about Heaven because Christ is a trustworthy, reliable, faithful witness. By faith, we trust the words of our Savior and King.

Christopher Columbus (1451- 1506) was an Italian explorer sent out by Spain. Before Columbus, Europeans spoke of the “Western Sea”; we now call it the Atlantic Ocean. Many wondered if anything existed beyond and people feared that you would sail off the edge of the world. Spain’s coat of arms once contained its national motto, “Ne Plus Ultra,” meaning, “Nothing More Beyond.” They believed that they could sail no further than the Pillars of Hercules.

In 1492, Columbus and his ships sailed off and Europe’s people waited expectantly. After a five-week voyage, Columbus sighted land in The Bahamas on October 12. He named this island, San Salvador (after Christ the Savior). Columbus returned to Spain in 1493 and the good news rapidly spread across the continent. When Columbus reappeared in Europe, crowds were ecstatic; they shouted with joy! Columbus announced a paradise beyond the sea, rich beyond their dreams. Soon Spain’s king changed his nation’s motto to “Plus Ultra,” meaning, “There is more beyond.” Their vision was stretched and expanded.

Before Christ was crucified for our sins and rose triumphantly from the tomb, people wondered if there was anything beyond death. In the cemetery, we stood beside the grave hole and watched sadly as our loved one was lowered into the earth. We saw and felt death’s sting and darkness. We grieved and wondered, “Is there anything more beyond?” We were afraid of death and rightly so.

After 33 years of obedient service, God’s Son suffered Hell’s equivalent on Calvary’s cross. Scripture says that Christ was made a curse for us, 1 that Jesus bore our sins in His body on the tree, 2 that God the Father laid on Christ the iniquity of us all. 3 On the first Good Friday, His disciples, His enemies, and the crowds watched to see what would happen after the Prince of Glory died and was buried.

But on Resurrection Day, the first Easter morning, Jesus stepped forth from the tomb and declared: There is something beyond! A whole new world; a whole new way of life with God. There is Paradise beyond your greatest expectations. Your Heavenly Father loves you and stretches out His arms to embrace you and to wipe away your tears! Christians believe in Heaven and eternal life with Christ after death because Jesus shows and tells us. He is the living proof and the Risen Savior sent Paul the Apostle to write to us:

Christ has indeed been raised from the dead,
the firstfruits of those who have fallen asleep.
For since death came through a man [Adam],
the resurrection comes also through a man [Jesus].
For as in Adam all die, so in Christ all will be made alive.
But each in turn: Christ, the firstfruits;
then, when He comes, those who belong to Him. 4

The whole world was lost in the darkness of sin, but the light of the world is Jesus! Aren’t you glad He came for us? Does Christ’s resurrection change the way you live? How?