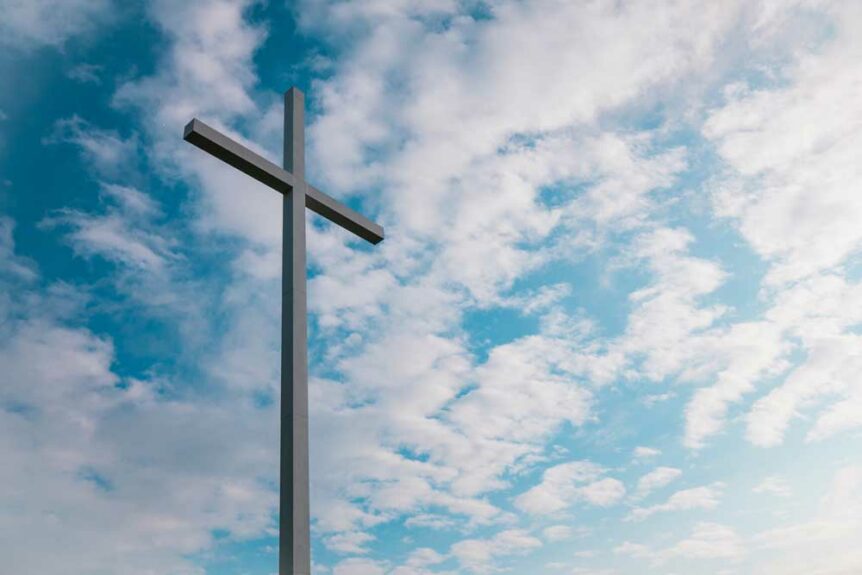 All Jesus’ followers are justified freely by God’s grace through the redemption that came by Christ. God presented Christ as a sacrifice of atonement, through the shedding of His blood,…so as to be just and the One who justifies those who have faith in Jesus. (Romans 3:24-26)

Philip Bliss and His Hymn

The Scripture above reminds me of a line from the hymn, “Hallelujah! What a Savior!” by Philip Bliss (1838–1876). A few weeks before he died, Bliss visited a prison in Jackson, Michigan. He preached on Jesus’ atoning death for our sins and sang this hymn with great conviction. Many offenders said that they came to faith in Christ that day.

Bliss and his wife, Lucy, died violently in a railway disaster on December 29, 1876. Their train was crossing a bridge, the bridge collapsed, and the train plunged into the river near Ashtabula, Ohio. Bliss’s trunk survived the crash and fire and contained the unpublished lyrics of his  song, “I Will Sing of My Redeemer.” After his death, it was set to music and published and it is still sung by God’s people today. Philip and Lucy are now safely home with Christ in Heaven.

Let’s look briefly at the words of this hymn and learn from it.

Man of Sorrows! What a name for the Son of God, who came
Ruined sinners to reclaim: Hallelujah! What a Savior!

Comment: Bliss draws on Isaiah chapter 53 and Isaiah’s prophecy was given to him by God the Holy Spirit to predict Messiah’s sufferings and His glories that would follow.1 Man of Sorrows is one name the Spirit gives to Christ here, which speaks of Jesus’ personal anguish in saving us. Son of God and Savior are two more names for Christ in this stanza. Jesus is fully God and fully human in one person. His humanity makes it possible for Him to obey God in our place and to die the death we deserve. His deity make His death and resurrection infinitely valuable to save all His people from all the consequences of their sins.2

Bearing shame and scoffing rude, In my place condemned He stood,
Sealed my pardon with His blood: Hallelujah! What a Savior!

Comment: Bliss used personal language here. Don’t miss it. Christ acted as our substitute, bearing our shame to take it away. The Psalmist prays: “In you, Lord, I have taken refuge; let me never be put to shame; deliver me in your righteousness.”3 Jesus was condemned by God in our place so that His followers never would be. Scriptures says: “There is now no condemnation for those who are in Christ Jesus.”4 The Lord sealed our pardon with His blood, so Jesus’ followers should not doubt His forgiveness. The Psalmist says: “Blessed is the one whose transgressions are forgiven, whose sins are covered. Blessed is the one whose sin the Lord does not count against them.”5

This language of personal salvation is found in Isaiah 53 and also in Scriptures like Galatians 2:20, “I have been crucified with Christ and I no longer live, but Christ lives in me. The life I now live in the body, I live by faith in the Son of God, who loved me and gave Himself for me.” Notice that he says “I” four times and “me” three times. Every Christian can say the same. Jesus continues to live within His believers by His Holy Spirit so that more and more we die to sins and live for righteousness. By Christ’s wounds, we have been healed from our former way of life.6

Quote: Jesus Christ is more than a system of truth to be believed in the mind, as we receive a system of philosophy or astronomy. Christ is the real, living, mighty Savior, who is able to save me now. He is also able to save to the uttermost all who come to God through Him, since He always lives to make intercession for us. (Catherine Booth, 1829-1890)

Guilty, vile, and helpless, we; Spotless Lamb of God was He;
Full atonement! can it be? Hallelujah! What a Savior!

Comment: This reminds us that we were guilty, vile, and helpless apart from Christ. Scripture says:

“All have sinned and fall short of the glory of God….The wages of sin is death, but the gift of God is eternal life in Christ Jesus our Lord.”7 Jesus makes atonement (at-one-ment) for our sins. He reconciles God to us, even though we have wandered and strayed from God. Christ brought His followers back into fellowship with God. He is the Lamb of God who takes away the sin of the world.8

Quotes: Either sin is with you, lying on your shoulders, or it is lying on Christ, the Lamb of God. (Martin Luther) The rulers of earth plan, scheme, and make and change laws. They war, and pull down one, and raise up another. But they forget that they rule only by the will of King Jesus, and that nothing happens without the permission of the Lamb of God. (J. C. Ryle)  When God writes our names in the “Lamb’s Book of Life” He doesn’t do it with an eraser handy. He does it for eternity! (R. C. Sproul)

Hallelujah! What a Savior!

To be continued. You can read Full Atonement: Can It Be? (Part 2)