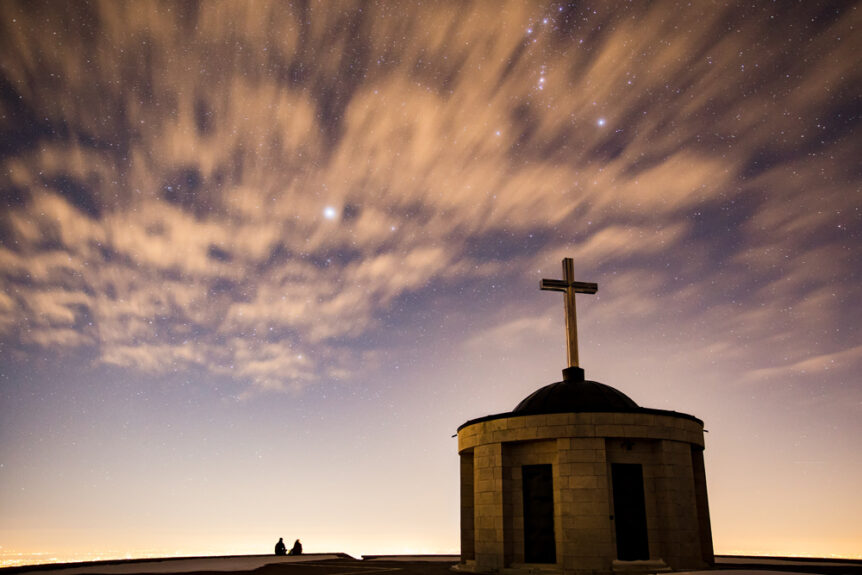 On the evening of that first Easter Sunday, when the disciples were together, with the doors locked for fear of the Jewish leaders, the resurrected Jesus came and stood among them and said, “Peace be with you!” He showed them His hands and side and the disciples were overjoyed. (John 20:19-20)

The Scriptural evidence for Jesus’ resurrection is very strong, but Thomas Jefferson (1743–1826), our third U.S. President, was a skeptic. He was a brilliant man in some ways, but he could not accept God’s miracles in Scripture. That’s foolish. Human beings are not competent to judge God. We must submit to His revelation and the Bible is full of His miracles from beginning to end. Jefferson edited his own version of the Gospels, called “The Life and Morals of Jesus of Nazareth.” Jefferson deleted most references to God’s supernatural work, confining himself mostly to Christ’s moral teachings, which he appreciated. Jefferson’s “Bible” closed with these words, “There they laid Jesus and rolled a great stone at the mouth of the sepulchre (tomb) and departed.” Jefferson cut out the resurrection. Thank God that’s not the way the true story really ends!

Other Opinions of Christ’s Resurrection

Near 90 AD, the Jewish historian Flavius Josephus wrote the Antiquities of the Jews. It contains two references to Jesus of Nazareth and one reference each to John the Baptist and Jesus’ brother James. Josephus reported that Jesus was the Messiah and a wise teacher who was crucified by Pontius Pilate and that His disciples reported that Jesus appeared to them alive on the third day.

Gilbert West (1703–1756) was an English poet who attempted to disprove the fact of Christ’s resurrection. After intensive investigation, West concluded that Jesus truly was raised as the Bible documents. He then published his essay “Observations on the History and Evidence of the Resurrection of Jesus Christ.”

Who Moved the Stone?

Albert Henry Ross (1881-1950) was an atheist and freelance writer who used the pseudonym “Frank Morison.” He launched a study similar to West, trying to debunk Jesus’ resurrection. Through his studies, Morison became a Christ-follower and authored the book, Who Moved the Stone? (1930). Morison analyzed all the biblical texts related to Jesus’ crucifixion and resurrection. He was skeptical at first, but later became convinced of the Bible’s truthfulness. Journalist G. K. Chesterton (1874-1936) expected the book to be a detective story, but found that the case for Jesus’ resurrection was treated in a logical and even legal manner. Many people have become Christians through Morison’s book, including Lee Strobel. John Warwick Montgomery and Josh McDowell used Who Moved the Stone? in their own books on Jesus’ resurrection.

Christ’s resurrection is the supreme vindication of His divine identity and His divine teaching. It’s the proof of His triumph over sin and death and Satan. It’s the foreshadowing of His followers’ resurrection. It’s the basis of Christian hope and the miracle of all miracles. (Lee Strobel)

The Bible’s accounts of Jesus’ resurrection are not myths or legends. Read them yourself and ask God to show you the Scriptures’ validity in convincing, moving, and life-changing ways.

Over forty years ago in Philadelphia, someone asked me to visit their friend in the hospital. On my first visit, Joe Kowalski1 said, “Bob, I’ve got terminal cancer and I’m afraid to die. Please help me.” Joe and I connected easily. His ancestors came from Poland to the Fishtown section of Philadelphia in the early 1900s. Joe was not a churchgoer, but he knew a little Bible truth.

Joe was feeling a mix of guilt, anger, pain, sorrow, and frustration. He confessed to not loving God and making no room for God in his thoughts and life.2 Now he realized how wrong he was. He knew it is a dreadful thing to fall into the hands of the living God.3 Then the nurse kicked me out of the room to give Joe medicine, but I promised to come back. I left Joe a 3×5 card with one Scripture on it: “God, be merciful to me a sinner!” (Luke 18:13) I urged Joe to pray that prayer to the Lord. I recruited Christians to ask the Lord to give Joe the new birth (regeneration). Jesus said, “No one can enter the kingdom of God unless they are born again….You must be born again.”4

On the next visit, I explained to Joe that Jesus is the eternal Son of God, equal to God the Father and God the Holy Spirit, who came down from Heaven to save us from Hell. Christ saved us by His sinless life, His atoning death on the cross, and His bodily resurrection. Joe had heard all that before, but he didn’t see how these ancient events could help him in 1980. I explained that Jesus is still alive in His glorious resurrection body in Heaven, still inviting us to come to Him in faith and receive eternal salvation as His free gift.

Over a few weeks, God’s way of salvation in Christ became clear to Joe and he was now ready to ask the Lord to save him. Joe prayed “The Sinner’s Prayer” and felt God’s love and forgiveness pour into his heart. Joe died soon after and I officiated at his burial service. His wife Minnie then became a member of our church.

Jesus said, “I am the resurrection and the life. The one who believes in me will live, even though they die; and whoever lives by believing in me will never die. Do you believe this?”5 Scripture says: To all who received and believed on the Living Christ, Jesus gives the right to become children of God….And everyone who calls on the name of the Lord will be saved.6

Prayer: Lord, have mercy on the unbelieving people in our families and in our sphere of contact. Put your Holy Spirit in them, take up residence in them, and bring them to faith in Christ. Jesus is the only Savior. Bring them to Christ and relieve them of the burden of their sin. We pray in Jesus’ name. Amen.