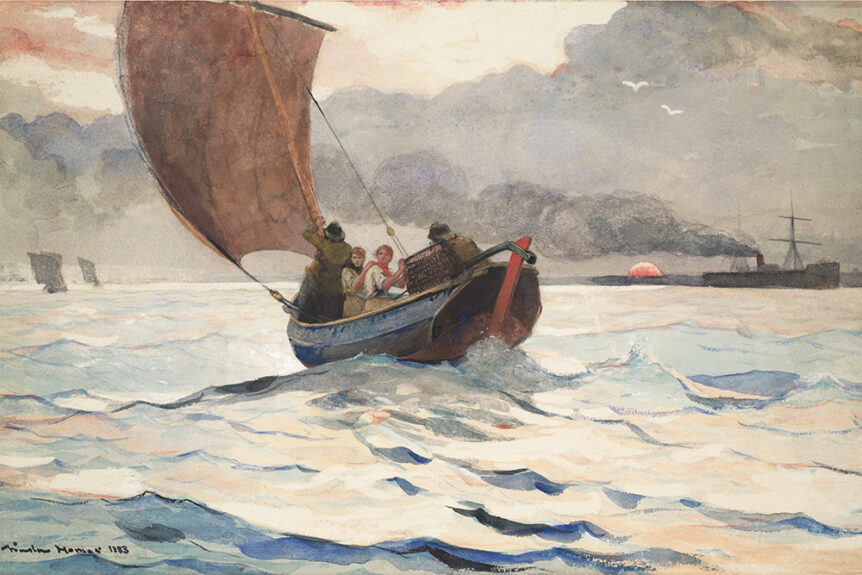 Christ got up, rebuked the wind and said to the waves, “Quiet! Be still!” Then the wind died down and it was completely calm. (Mark 4:39)

Many things in Scripture and life are deeper than they seem at first. In April 1984, President Ronald Reagan threw out the first pitch at a Baltimore Orioles game and then watched the game from the dugout. Other presidents and celebrities often perform this ceremonial act at baseball games, and many throw bad pitches. Reagan was 73 at the time, so Baltimore’s catcher suggested that Reagan walk in halfway from the pitcher’s mound and lob it in. But Reagan was sure of himself. He walked all the way to the mound, 60 feet from home plate, threw a perfect strike, and it made a “smack and splat” sound in the catcher’s mitt. It shocked the catcher and all who watched it!

Well, it was really no surprise at all. Reagan’s friends told later that he had spent the past six or seven weekends practicing his pitching. During break times, Reagan had a Secret Service man help him with his fastball. Reagan’s preparation explains why his opening pitch in Baltimore hit the bullseye so wonderfully that day.1 Practice made perfect.

Christ’s miracle of calming the storm on the Sea of Galilee is recorded in Mark chapter 4, Matthew chapter 8, and Luke chapter 8. At least four of the apostles worked as fishermen, so this miracle made a big impact on them. It wasn’t a myth that someone invented; they were eyewitnesses and wrote it down for us. The Apostle John said: “Jesus also did many other mighty acts. If they were all written down, I suppose the whole world could not contain the books that would be written.”2 It’s hyperbole, a deliberate overstatement, to tell us that he and the other Gospel writers recorded only a fraction of what Jesus actually said and did, and what they recorded is a treasure. The Bible was written that we may believe that Jesus is the Messiah, the Son of God, and that by believing we may have eternal life.3 That’s why the Scriptures are more precious than pure gold and sweeter than honey from the honeycomb.4 They show us Christ, God’s indescribable gift.

Christ also performed a similar rescue mission for the disciples, when He walked on the water and came to them.5 Another day Christ miraculously produced a huge catch of fish and He did a similar thing another time after His resurrection from the dead.6 If you have time, please look up these Scripture passages. By the Holy Spirit blessing, they will do your soul great good. They remind us that Jesus’ life was a blaze of miracles, beyond the ability of science to explain and also be beyond the ability of science to disprove. Christ’s mighty acts remind us that He is never in a rut, never unable to do new and different things that amaze us. But why are so many of these miracles connected with the sea?

Christ Shows that He is God the Creator

John chapter 1 says: In the beginning was the Word, and the Word was with God, and the Word was God. He was with God in the beginning. Through Him all things were made; without Him nothing was made that has been made….The Word became flesh and made His dwelling among us. We have seen His glory, the glory of the one and only Son, who came from the Father, full of grace and truth….No one has ever seen God, but the one and only Son, who is Himself God and is in closest relationship with the Father, has made Him known.7

John writes about Jesus’ deity in a powerful way. He calls Christ “the Word” (logos in Greek), recalling the Old Testament where God’s word is the dynamite of His creative and restorative purposes.8 Jesus is not mentioned by name until John 1:17, but we and the original readers know that Christ is the Word from the rest of John’s Gospel. He is the logic for God’s creation, providence, and plan of salvation.

Notice especially John 1:3: “Through Him (Jesus, God’s Son) all things were made; without Him nothing was made that has been made.” It recalls the Bible’s opening lines: “In the beginning God created the heavens and the earth….And God said, ‘Let the water under the sky be gathered to one place, and let dry ground appear.’ And it was so. God called the dry ground ‘land,’ and the gathered waters He called ‘seas.’ And God saw that it was good.9 The Lord (Father, Son, and Holy Spirit) created everything out of nothing by just speaking.

That why Jesus could do miracles on the sea, with fish and fisherman. Because He is the Creator of oceans, seas, lakes, other bodies of water, and of everything else. Far greater than Reagan’s first pitch that he had practiced for, Christ, the Son of God, made the seas and has been holding them together every day since He created them. So His miracles on the Sea of Galilee were easy for Him.

Christ’s Miracles Help us Trust Him

Jesus is not half-human and half-divine. He is Theanthropos, the unique God-man. Christ is 100% God and 100% human in one person. He is the only God-man who has ever lived or will ever exist. Christ gave Himself as a ransom for sinners and He is the only mediator between God and humankind. And we need Him to arbitrate for us.10

Author Lynn Austin says: “Life is hard, but God is good! We find strength by trusting Him. Faith in Christ comes one step at a time. Decide to trust Him for one little thing today, and before you know it, you find out He’s so trustworthy you will be putting your whole life in His hands.” That’s what Jesus wanted from His first disciples and what He wants from us today.