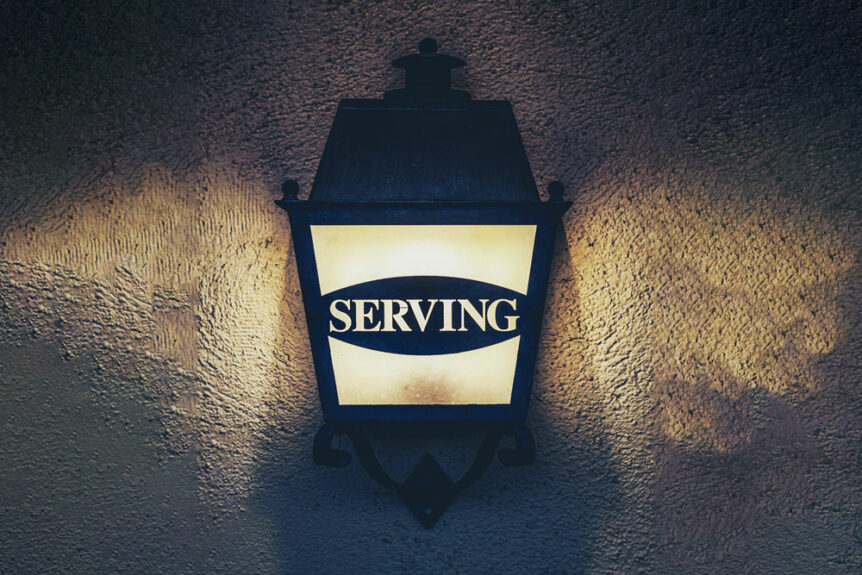 Christ said: I am among you as one who serves….You, my brothers and sisters, were called to be free. But do not use your freedom to indulge the flesh; rather, serve one another humbly in love. (Luke 22:27; Galatians 5:13)

Ignacy Jan Paderewski (1860-1941) was a Polish musician and composer. At his peak, he was the world’s most famous piano player. At one concert in New York, all the rich and famous people were there, with standing room only. In the audience was a mother with her young son, Tommy. People fought to get tickets to this event, but the boy would rather have been anywhere else in the universe. Tommy was uncomfortable and fidgety. He hated being dressed up and sitting still. So when his mother turned to talk to someone, Tommy ran out of his row, down the long aisle, climbed up the stairs onto the big stage, and sat down on the padded seat by the beautiful Steinway grand piano. And he started to play “Chopsticks.”

At first the crowd was stunned and hushed, but soon they got very angry. This sophisticated audience became a snarling mob. People began to yell, “Who’s that brat? What’s he doing? Get him off!” Tommy froze with fear, nervous and unsure what to do next. Backstage, Padereweski heard the uproar and came up behind the boy. The master stooped over, put his arms around Tommy, and began to improvise a duet. He wove in a counter melody to enhance and harmonize with “Chopsticks.” Padereweski kept whispering, “Don’t stop, son, you’re doing fine. Keep going and don’t stop until I tell you.”

All of us who serve Jesus in any way, feel like Tommy. Or we should. Most of the time, we feel like the best we can do is “Chopsticks.” And yet the Lord comes often, stoops down and puts His arms around us, and helps us. He makes something beautiful out of our ordinary, inadequate work. Prison Fellowship’s Charles Colson (1931-2012) said: It’s not what we do that matters, but what Christ our King chooses to do through us. He doesn’t want our success. He wants us! He doesn’t demand our achievements. He demands our obedience and we leave the results with Him.

Jesus is the unique Son of God and Savior. And He is also our supreme Model of service. He said: “I am among you as one who serves.” In Isaiah chapters 42-53, Messiah is called the Lord’s Servant many times. In this and subsequent posts, I want to look at some aspects of Christian service that apply to every believer. Not only to church officers, but to all of us.

Isaiah 42 speaks about the kind of Servant Christ is, and Jesus is one-of-a-kind. But He is also our Example and our Pattern and that’s what I am emphasizing now. I acknowledge the help of Pastor Robert Peterson who I heard years ago.

Maybe this is why many people avoid serving in churches and other Christian ministries. Jesus taught us to expect opposition to come from outside, from unbelievers. He warned, “You will be hated by everyone because of me, but the one who stands firm to the end will be saved.”1 Stephen the deacon and evangelist was stoned to death for preaching the gospel. James the apostle and John the Baptist were beheaded because they spoke God’s truth. And these two were Jesus’ cousins! Old Testament Israel was persecuted by enemies around them and New Testament Christians were oppressed by Jews and Gentiles.

But antagonism also comes from inside. Scripture calls God’s people sheep that He cares for because sheep herding was common in Bible times. I read that it is hard for a sheep to bite someone due to the way that their jaws and mouths are designed. So they don’t usually bite out of fear or anger, but sometimes they do bite humans or each other.

Jesus calls His followers sheep and calls those who will not follow Him goats.2 But sometimes God’s people behave more like goats. Butting heads with us when we try to serve them. Biting us when we try to feed them. People can be cruel to and critical of any Christian worker. The Hebrews challenged Moses and his motives.3 Even Miriam and Aaron, his siblings, were jealous of Moses and talked against him because of his Ethiopian wife, Zipporah.4 She was from a different ethnic group, so they picked on her and hurt Moses. That sounds so modern! Likewise, the Corinthian church treated the Apostle Paul badly. They thought they were so mature and spiritual, but they broke the apostle’s heart the most. They were still thinking and behaving like pagans, not Christians.

Only Sinners Saved by Grace

In God’s church, Jesus’ people can bite, hurt, and sin against one another intentionally and unintentionally, because we are only sinners saved by grace. We are at the same time righteous and justified (pardoned and accepted) by God in our connection with Christ, and very flawed. Because of the Holy Spirit’s work in us, we want to do what is good, but we don’t always. And we don’t want to do what is wrong, but we also still stumble in many ways.5

In many churches, members take these or similar vows:6

Real Christian admit that we are still sinners, saved only by God’s grace through faith in Jesus, and we still need the Spirit’s help every day to live like Jesus. Christ is for us and the Spirit is in us. That’s our only hope. Christian servants inside God’s family (the Church) still suffer hurt from other believers even as we try to serve them. That’s why we need the Lord to uphold us in serving. We need King Jesus to sustain us, like Padereweski did with Tommy. Or small and simple acts of service are blessed when Christ the Master takes our “Chopsticks” and makes them beautiful in His way and time.

So do not fear, for I am with you. Do not be dismayed, for I am your God. I will strengthen you and help you. I will uphold you with my righteous right hand. (Isaiah 41:10)

To be continued. You can read Depending on Jesus.