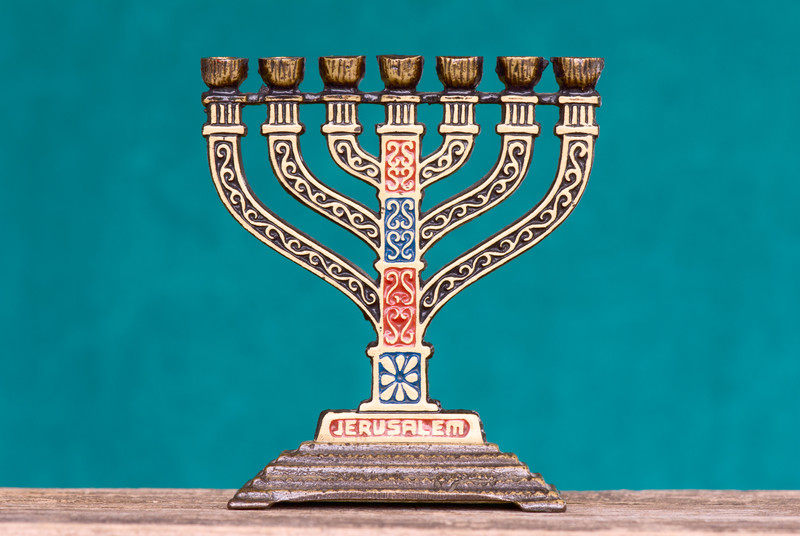 In Jerusalem near 30 AD, the Lord Jesus attended the Hanukkah celebration. John 10:22 calls it “the Feast of Dedication” and it’s also called “the Festival of Lights” by Jewish people today. In John chapter 10, Christ calls people to faith in God at a time when love for the Lord was flickering low. Jesus speaks of Himself as the Good Shepherd and Jewish hearers caught the messianic sense of Jesus’ words. Ezekiel chapter 34 prophesied that Messiah would be the God-anointed Shepherd of God’s people. Jesus announced that He is the fulfillment of Ezekiel’s prediction and He calls all people to trust and obey Him.

Many of the Jewish people were not looking for God’s eternal salvation from sin, darkness, the devil, and Hell. Many were looking only for political deliverance from the Roman oppressors. Hanukkah is not commanded in the Old Testament, but celebrates events occurring near 165 BC (between the Old and the New Testaments). Against all odds, a small band of Jews, led by Judah the Maccabee, defeated a mighty army, drove foreigners from the land, and reclaimed the Jerusalem Temple. Jewish tradition teaches that a one-day’s supply of oil for the Temple light lasted eight days. Judah was nicknamed “The Hammer” and most Jewish people in the first century were looking for another military hero to liberate them again. That’s the setting for John chapter 10.

As Jesus walked around the Temple enclosure, some Jews approached Him and asked point blank, “Are you the Messiah (the Christ)?” (10:24). He answered:

“I did tell you, but you do not believe. The works I do in my Father’s name testify about me, but you do not believe because you are not my sheep. My sheep listen to my voice; I know them, and they follow me. I give them eternal life, and they shall never perish; no one will snatch them out of my hand. My Father, who has given them to me, is greater than all; no one can snatch them out of my Father’s hand. I and the Father are one.” Again His Jewish opponents picked up stones to stone Him. (John 10:25-31)

Evangelist Fred Klett comments, “The Messiah they hoped for was too small.” Jesus truly is and claims to be God’s Rescuer, God’s Unique Son, who comes to reverse the curse brought on us by Adam and Eve’s rebellion. Christ says He is the woman’s Seed promised in Eden, who comes to crush Satan’s head (Gen 3:15). He’s the One the whole Old Testament was pointing to! But the Jewish people were not ready to hear that and wanted to kill Jesus. They wanted their kind of Messiah, on their terms, who met their expectations. They were disappointed with Christ.

Klett reminds us that Jesus isn’t a temporary fix for coping with life’s crises in the 1st century or now. He is the Divine Savior who gives us the ultimate victory. He defeats sin, raises the dead, and gives an eternal inheritance to all who repent and believe on Him. In this life we all face disappointment, death, trouble, and tragedy, but the eternity we will spend with God (Father, Son, and Holy Spirit) in the New Heaven and New Earth outshines whatever we suffer now (see Rev 21-22). No matter what sin we struggle with, no matter what hardship we face, Jesus is the Divine Deliverer who we need.

Thank God, Christ doesn’t come to save Jewish people only. God the Father says to God the Son, “It is too small a thing for you to be my servant to restore Jacob’s tribes and bring back those of Israel I have kept. I will also make you a light for the Gentiles, that my salvation may reach to the ends of the earth.” (Isaiah 49:6) In the 21st century, Jesus is still gathering His believers all around the globe and He promises, “The earth will be filled with the knowledge of the LORD as the waters cover the sea. (Isaiah 11:9) That promise is being fulfilled right now.

Hanukkah is a festival of lights for Jewish people, but Christ announces something bigger and better:

“I am the light of the world. Whoever follows me will never walk in darkness, but will have the light of life.” (John 8:12)

What a wonderful promise, when we are surrounded by so much moral and spiritual darkness. Jesus’ light reassures us of God’s love and re-orients us back to Him. The Holy’s Spirit’s word, the Bible, is a lamp for our feet, a light on our path (Psalm 119:105) to guide us through this life to Heaven.

And Christians are to reflect Christ’s life-giving light to the world. “We all, who with unveiled faces contemplate the Lord’s glory, are being transformed into His image with ever-increasing glory, which comes from the Lord, who is the Spirit.” (2 Cor 3:18) We cannot produce God’s light. We can only reflect Jesus and point others to Him. May the Lord help us to do that more consistently this holiday season and until Christ returns for us!

All of life illustrates Scripture truth and Hanukkah points to Jesus.

Note: Rev. Fred Klett serves with CHAIM, a Reformed ministry to Jewish people. He spoke on this subject in Philadelphia years ago and parts of this article draw on my notes from his sermon.