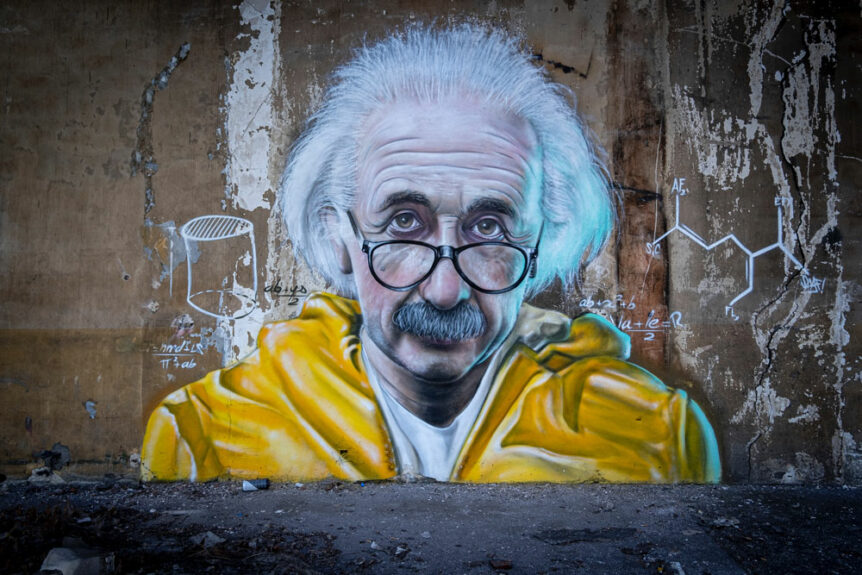 Jesus, teaching in the temple courts, cried out, “Yes, you know me, and you know where I am from. I am not here on my own authority, but He (God the Father) who sent me is true. You do not know Him, but I know Him because I am from Him and He sent me. (John 7:28-29)

Writer and historian John Dickson wrote about a 1929 interview of Albert Einstein. Einstein was asked how he was influenced by Christianity. He answered, “As a child, I received instruction both in the Bible and in the Talmud. I am a Jew, but I am enthralled by the luminous figure of Christ the Nazarene.” He was asked, “Do you accept the historical existence of Jesus?” Einstein answered, “Unquestionably! No one can read the Gospels without feeling the actual presence of Jesus. His personality pulsates in every word. No myth is filled with such life. How different, for instance, is the impression which we receive from legendary heroes of antiquity like Theseus. Theseus and other heroes of his type lack the authentic vitality of Jesus.” Einstein never became a Christ-follower but he still found Jesus to be a real and fascinating person. Unlike mythical Greek gods.1

In a recent prison class, we studied Jesus as the Master Teacher. These notes continue on the theme of “Learning from Christ” and expand on that class. This post builds upon Loving God and Neighbor

Christ Teaches us to Love Our Enemies

Scripture: Love your enemies, do good to those who hate you, bless those who curse you, pray for those who mistreat you. If someone slaps you on one cheek, turn to them the other also. If someone takes your coat, do not withhold your shirt from them. Give to everyone who asks you, and if anyone takes what belongs to you, do not demand it back. Do to others as you would have them do to you. (Luke 6:27-31)

Comments: Jesus said that loving those who love us back is easy and even unbelievers do that. He calls Christians to be like our Heavenly Father who shows undiscriminating love of benevolence (good will) to all people, no matter what religion, nationality, or personality.2 God has put His Holy Spirit in Christians so that we can now reflect His character and demonstrate kindness to both friends and foes. Christ is teaching us to live by a higher standard than the world expects, calling and enabling us to be imitators of God.3

Try to Understand Them

Louie Anderson (1953–2022) was an American comedian and actor. His father, William, was an alcoholic and abusive to his wife and 11 children. Louie’s hard childhood left him bitter, until he learned about his father’s life struggles. Louie learned that his dad’s life was ten times harder than his. When William was 10 years old, he and his sister were taken out of their home and placed for adoption. They were split up and never saw each other for 50 years. They were put up in front of a church congregation and two families each picked one child and took them home. Knowing the family history helped Louie understand how his father was hurt in life by people and circumstances and how this contributed to his angry and hurtful behavior. As William was dying of cancer, Louie forgave him and said, “Forgiveness was easy for me when I found out my dad’s past.”4

We often react strongly to what people do to us, without considering what life struggles may have pushed them to act that way. Scripture teaches that in this world we have troubles, tribulation, tears, mourning, crying, abuse, abandonment, rejection, pain, and death. We shouldn’t be surprised that unsaved people act unsaved, and that saved ones don’t fully live out our new life in Christ. Even Jesus’ first disciples misunderstood, denied, and betrayed Him. 1 Peter 3:8 says, “Be like-minded, be sympathetic, love one another, be compassionate and humble.” It’s close to the saying, “Don’t judge a person until you have walked a mile in their shoes.” Understanding others can help us to be more forgiving.

Remember That We Were Once Enemies

Scripture says that Christians were once God’s enemies, but we were reconciled to Him through the death of His Son. Once we were alienated from God and enemies in our minds because of our evil behavior.5 A saying goes, “Never forget where you came from and who helped you to get where you are now.” It reminds us that we were not always Jesus’ followers and even now we are full of inconsistencies. So we shouldn’t be arrogant and look down on others because of their faults and failures. We should all be like Pastor John Bradford (1510–1555). He saw criminals being led to the scaffold to be hanged and said, “Except for God’s grace, that would be me.”

I often mention Jim Elliot and the four other missionaries who were killed by indigenous people in Ecuador in 1956. What happened next was amazing. Jim’s wife Elisabeth, Valerie their daughter, and Rachel Saint willingly chose to stay among the people who killed their loved ones. They lived with the Huaorani people, learned their language, and translated the Bible for them. Christ-like forgiveness and kindness convinced the Huaorani of God’s love for them and many came to follow Jesus as Lord and Savior. They believed the message of Christ’s death and resurrection because they saw it lived out by the women.6

Scripture says: Do not repay anyone evil for evil. Be careful to do what is right in the eyes of everyone. If it is possible, as far as it depends on you, live at peace with everyone. Do not take revenge, my dear friends, but leave room for God’s wrath, for it is written: It is mine to avenge; I will repay, says the Lord. On the contrary: If your enemy is hungry, feed him; if he is thirsty, give him something to drink. In doing this, he will feel ashamed of himself for what he has done to you. Do not be overcome by evil, but overcome evil with good. (Romans 12:17-21)

As Christians show love and kindness to our enemies, God the Holy Spirit takes people firmly by the hand and lead them into repentance, a radical life-change.