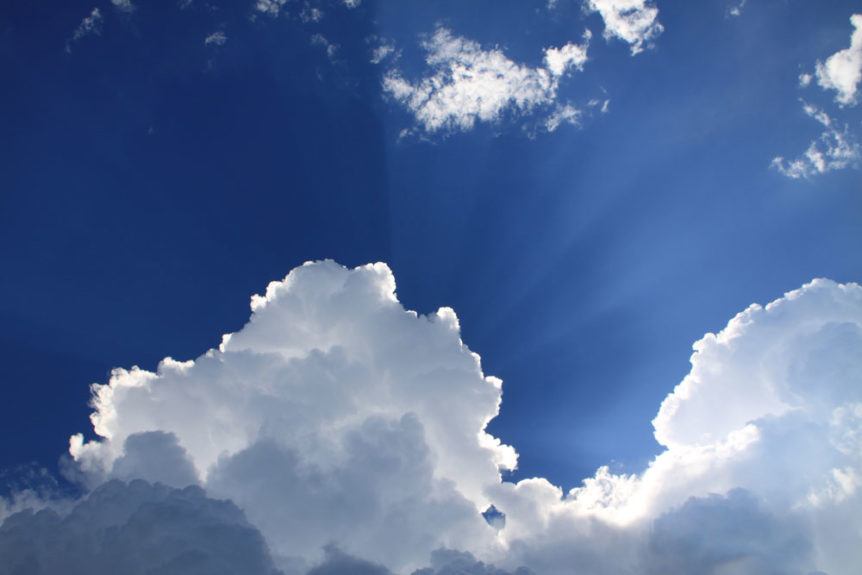 Praise the LORD, O my soul….He stretches out the heavens like a tent and lays the beams of His upper chambers on their waters. He makes the clouds His chariot and rides on the wings of the wind. He makes winds His messengers, flames of fire His servants. (Psalm 104:1-4)

King David reminds us that every object we see in God’s creation calls us to admire and adore the Maker and Master of heaven and earth. The Lord’s invisible qualities, His eternal power, wisdom, and love, are clearly seen and understood from what He has made, so that all people are without excuse.1 God (the Father, Son, and Holy Spirit) demands and deserves our worship.

Psalm 104 points us back again to Genesis 1:

God said, “Let there be an expanse [the sky] between the waters to separate water from water.” So God made the expanse and separated the water under the expanse from the water above it. And it was so. God called the expanse “sky.” And there was evening, and there was morning—the second day.2

The Lord created the sky and it looked like a canopy, vault, or something solid to human beings on earth. Clouds are large collections of very tiny droplets of water. The droplets are so small and light that they float in the air. So the sky separates watery clouds above from water down on the planet below. “By wisdom the Lord laid the earth’s foundations, by understanding He set the heavens in place; by His knowledge the watery depths were divided, and the clouds let drop the dew.”3

When asked if he believed in God, physicist Albert Einstein responded: “We are in the position of a little child, entering a huge library whose walls are covered to the ceiling with books in many different tongues. The child knows that someone must have written those books. They do not know who or how. They do not understand the languages in which they are written. The child notes a definite plan in the arrangement of the books, a mysterious order, which they do not comprehend, but only dimly suspect.”

Einstein marveled at the design he saw in nature, but he did not believe in the Lord, the personal Creator, God the Father Son, and Spirit. The Bible writers shared Einstein’s awe about nature but took the next step and trusted in the Designer behind the design: “The heavens declare the glory of God; the skies proclaim the work of His hands.”4 In Psalm 104, David expresses his love for the Lord, his Shield and Defender.

The ancients envisioned several levels of heavens, having floors, walls, and roofs with the Lord in the highest place, above the roof beams of the upper story. The Bible is clear that God the Creator is above and beyond His creation, not part of it or limited by it. “Clouds and thick darkness surround Him; righteousness and justice are the foundation of His throne.”5

Jesus: Ruler of the Wind and Waves

Psalm 104 says that God is the Maker and Master of water, clouds, and wind. It reminds us of Christ calming the storm in the Gospels. Christ is in a boat on the Sea of Galilee with His disciples. Jesus (fully God and fully human in one person) is tired from a busy day of ministry, so He was sleeping in the back of the boat on a pillow. A furious thunderstorm came up and the waves flooded into the boat, so that it was in danger of sinking. The fearful disciples woke the Lord, begging to be rescued, and accusing Him of not caring for them. Christ calmly got up, rebuked the raging storm and said, “Peace! Be still!” Then the wind died down and the water was completely calm, as smooth as glass. The disciples were filled with awe at Jesus’ demonstration of divine love and power and they asked each other, “Who is this? Even the wind and the sea obey Him!”6

I love this miracle for several reasons:

Who is like you, Lord God Almighty?
You, Lord, are mighty, and your faithfulness surrounds you.
You rule over the surging sea; when its waves mount up, you still them. (Psalm 89:8-9)

To be continued. You can read Celebrating the Lord Using Psalm 104 (Part 6)